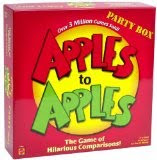 If you don’t already own Apples to Apples, please consider putting it on your family’s holiday gift list. Here is why, along with some tips for different ways to play if you are already familiar with the game:Everyone Plays at Once Even when it is not your turn, you are still actively participating. No one gets bored waiting for their turn.

Tip: Sometimes players (usually one repeatedly) take a long time to play their card, holding up the whole round. One way to solve this, especially if you are playing with a big group, is to make a rule that says that the last card played does not count for that round.

You can Play with Big and Small Groups I have played this game with up to 15 people and it still works. However, if that feels like too much, you can easily just split into two groups since there is no central board needed.
Tip: If you only have three or four people and want to play, there are two good ways to proceed:

Even Young Children Can Play There is a Junior Version with easier, and more appropriate words. Even non readers can play by partnering up with a reader. The classic Edition will work for most kids over 12, though there will still be some historical references they won’t get. There is also a Jewish Edition, Bible Edition and a Disney Edition.
Tip: You could allow children to put back cards with references to people or historical events that they do not know, but you could also grab that teachable moment by having the child show the card first so that an adult or older child can explain the reference.
It Requires Players to Think Critically and Creatively To play successfully, players must consider how the player acting as the judge for a given round will view the cards they put down. Players often use prior knowledge about a person’s likes, dislikes, history etc. when evaluating their choices. Since players can “lobby” for their cards, they need to think about what the best strategy would be for convincing the judge to choose their card (should they choose to lobby at all – sometimes silence is golden).

Tip: Playing Sour Apples (when players put down the opposite card to go with the judge’s card) is a fun variation that adds an extra level of thinking.

It is Fun! This is one of those rare games that is equally fun for both children and adults. My daughter, who is nearly 14 and too cool for almost everything, still loves to play this game with her friends!
Tip: Just for fun, at the end of the game have each person say, “I am…” and then list the green cards that they have won.
200 Would You Rather Questions for Kids
Analogy Practice

Blokus 3D – A Chip off the Old Blok

3 Free Game Boards!
Giving Directions Drawing Activity
The Creative Classroom – What to do with Walls