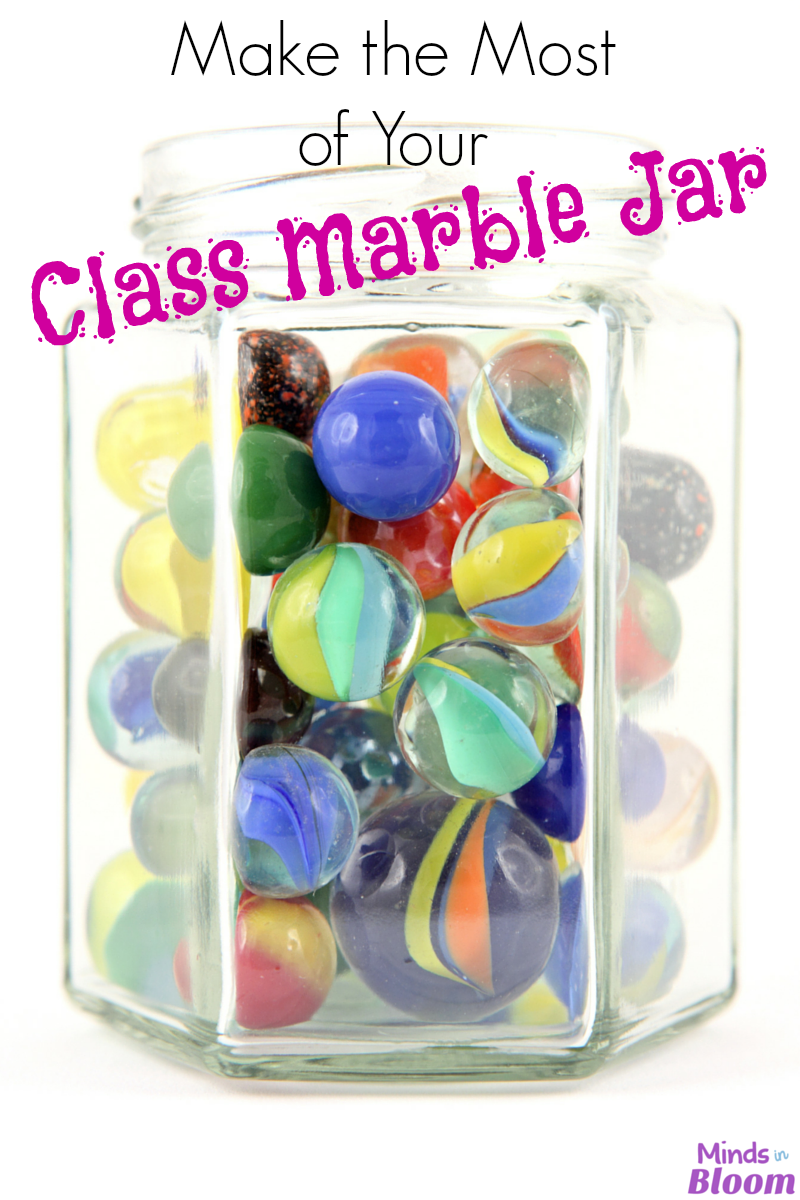 If you teach in an elementary classroom, chances are, you have a Marble Jar. The Marble Jar is one of my favorite classroom management tools because it is so easy and there are so many ways to use it! Just in case you have never heard of the Marble Jar, the basic idea is that you start with an empty jar, and you add marbles to reward good behavior. When the jar is full, your class gets a treat of some sort. Here are some suggestions for getting the most from your jar:

Before you implement the Marble Jar consider how often you want to reward your students. Choose a big jar if you want them to work a long time to earn their reward. Keep in mind that a big jar also merits a big reward, such as a class party. Your students will not be very motivated to fill the jar if the reward is an extra five minutes of recess. If you have a particularly challenging class, consider a smaller jar with small, but more frequent rewards. Otherwise, the goal may seem so far away that it is virtually unattainable.

Warm fuzzies are nice, but they don’t plunk!

Some teachers use puff balls instead of marbles, often to go along with the idea of giving Warm Fuzzies. As it happens, I am a big fan of warm fuzzies–love the concept, love the book–but I don’t like them in place of marbles mainly because when you add one to the jar, there is no “plunk.” The plunk is super valuable because it speaks for itself. When you drop marbles in the jar, you don’t have to say a word (though sometimes you will want to if it is not clear why marbles are being added).

Sometimes, the plunk is enough. If everyone is working quietly, and you drop a few marbles in the jar, then you really don’t have to tell them why. But often you will want your students to know why you are rewarding them, so saying something along the lines of, “Thanks for being ready to start math, Table Three” or “Wow, you were all so quiet in line on the way back from music that I think we need to add some marbles to the jar” will let them know exactly why you are adding marbles. You can also add a small bonus by asking students to add marbles: “Thanks for being so helpful during math today, Julia. Why don’t you add five marbles to the jar?”

One nice thing about a big jar is that you can be generous with your rewards. Dropping marbles in the jar often does several good things: It reminds them that you are always watching, it reinforces good behavior, and it allows you to reward many different kinds of behaviors. What should you reward? Here are some ideas:

While you don’t want to be stingy, you also don’t want to reward every single good behavior. One of the powers of the Marble Jar is that it uses Random Reward to reinforce the behaviors you want to see, which is much more powerful than rewarding consistently (think of slot machines).

Yes, you can take marbles out for bad behavior, but try to avoid it. The Marble Jar should be a beacon of positivity, not a reminder of less than admirable behavior. If you do decide to take marbles out of the jar, make a really, really big deal about it. Make sure they understand that desperate times call for desperate measures.

Bonus marbles are marbles that you put in a little dish beside the marble jar at the start of the day. At the end of the day, you decide if your students have earned all, or any, of the bonus marbles. This can lead to some great discussions if you ask them if they think they deserve the bonus marbles. Just lay some ground rules, such as not naming individuals. Often they will be harder on themselves than you would have been. Another interesting thing to try is to give each student a marble at the start of the day. On the way out the door at the end of the day, each student must consider his or her own behavior and deposit his or her marble into either the Marble Jar or back into the container where you keep the not-yet-added marbles.

The best rewards are something each student in your class will enjoy, are free or cheap, don’t take up too much time, and are easy to implement. Depending on your class, a reward can be as simple as 15 minutes of free time on a Friday, but in most cases, you will need to go a little bigger than that. Class parties are popular. One idea for choosing the reward is to have the students brainstorm a bunch of ideas, narrow down to three or four, and then allow students to rank them individually by preference. This will give you a good idea about what is most motivating for your class.
Do you have a Marble Jar in your class? How is it going for you? Any ideas to add? Please comment.
* Minds in Bloom, Inc. is a participant in the Amazon Services LLC Associates Program, an affiliate advertising program designed to provide a means for sites to earn advertising fees by advertising and linking to Amazon properties including, but not limited to, amazon.com, endless.com, myhabit.com, smallparts.com, or amazonwireless.com.

Stability Balls in the Classroom