Help! My Students Are So Rude, Mean, and Disrespectful to Each Other! - Minds in Bloom
I often post questions from teachers on my Facebook wall. It is always amazing to see the helpful and insightful answers that other teachers post. A few days ago, a teacher named Jenny Eldridge had a great question about how to keep her students from being mean and disrespectful to each other. I was so impressed with the answers that I decided to post some of the 52 responses here so that more teachers could benefit. 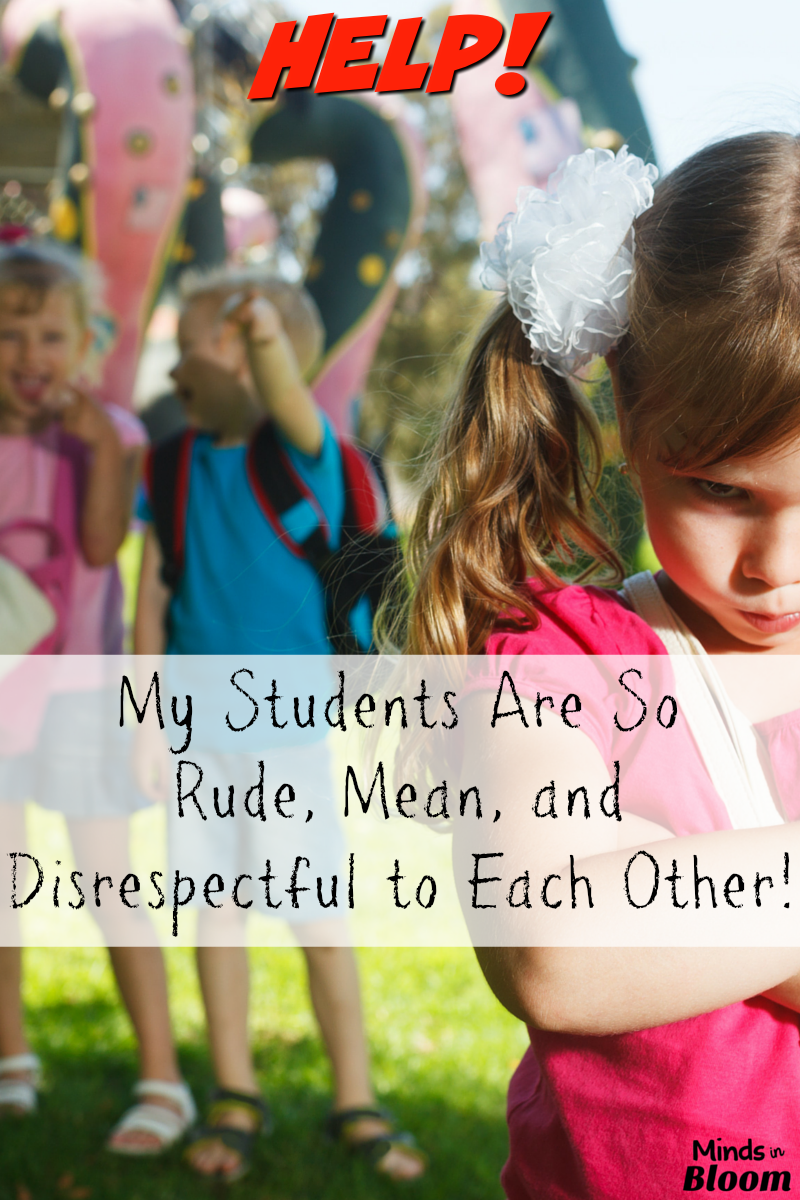 I teach 4th grade and have three weeks of school left. My students are starting to become really disrespectful and rude toward each other. Their tone of voice when talking to each other is so mean and snippy! There has been eye-rolling, catty remarks, and girl drama. I have tried to combat this disrespect with my management plan, which has worked up until now, but it is no longer working. Any suggestions for something new?

Here are some helpful responses:

Give tickets for positive behavior. Have students write their names on them, and put them in a basket. Draw a few tickets each day or a bunch at the end of the week. I created prize tickets. There are four prizes to choose from on each card. Most of these are things you don’t have to buy. My kids loved it! I saw behavior change tremendously. -Sarah Cook Merrell

I’m having the same issue with some of my 4th graders. I decided to tie behavior into the end-of-year celebration. They have to earn tickets for going above and beyond and for good behavior. They will use them to “purchase” party snacks and drinks at the end-of-the-year celebration, and their remaining tickets will be used in various raffles I’m having – things that are no longer needed in the class or treasure box-type prizes. I take tickets for any rules broken, and when I do, it makes a huge impact! Working well so far! -Chrissy Cancel

I stop immediately and go back to day one with the rules they set up. I also pump up the compliments to those who are doing what is being asked: “Thank you to Michelle for being ready to learn, or for being a great friend today.” It’s happening in my room, and I teach 2nd. It’s that time of the year, and I try to keep a lot of hands-on activities that allow for chatting, moving, and discussing. -Michelle Murphy Ramey

I have a “warm and fuzzy” jar. When they are kind to one another, they earn one of those soft pom-poms to put in the jar. When it’s full, we have a party. With only three weeks left, I might make the goal a little smaller so there’s possibility of achieving it. -Alison Adams

I had the same issue with my 2nd graders last year. I know it sounds funny, but like the cuss jar for adults, I used marbles. They each had a cup on their desk. For every rude comment I heard or someone complained about something, they put marbles in their cups. By Friday, if they had marbles, they multiplied each marble by 2–that was how many minutes they missed Fun Friday. Then, on the last full day of school we had ice cream sundaes. Each day their cup was empty, they got a part of their ice cream sundae–first a bowl, then a spoon, then a scoop, another scoop, and then toppings. A few of my turkeys had a bowl and a spoon on that last day. They sat with the principal and wrote letters to their parents to tell them why they missed the sundae party. During the time they sat out–they wrote letters of apology to the students they were sassy to. It taught most of them lessons. Hard lesson to learn, but the rest of us had a lovely time eating our sundaes! -Jill Anderson Danklefs

Two Mr. Potato Heads. Divide the class (boys vs. girls worked well in my 4th grade class – it depends on the issues. You might need to split up so you have girls on each team, if it’s the girl drama). First group to fill their Mr. Potato Head wins a prize (popcorn or ice pops during class time worked well and is cheap). Give and take those pieces for EVERY little thing. -Jennifer Keough

We have a few special events at the end of the year, like Field Day and a picnic. About three weeks before hand, we begin giving students check marks for infractions, such as no homework, disrespect, etc. For each check mark, students miss five minutes of the event. When students received an infraction, they needed to go to a specific teacher who recorded the check marks. It served as a reminder to students that they were still accountable for their actions. We just had the first event, and a fair number of students owed some time. We are now a week out from the 2nd event, and no students have check marks! -Andrea Gibble

I find that an infusion of excitement helps. It might just be a new class behaviour type system for a few weeks. One I made up a few years ago was drawing a treasure map on a large piece of paper and adding a coordinates grid over it. If they’re caught doing something great, then they get to put their name in a square. If the whole class is working well, they get a clue as to where the pirates travelled. I named coves, mountains, valleys, etc on the map. A clue might be, “They travelled south past Captain’s Creek.” You can make up as many clues as you like. Once the squares are filled, you tell them where the treasure was buried, and the person (or people, if you like) gets some kind of prize. My kids were really excited about figuring out where the treasure was and tried to be strategic about it. -Rachael Bell

I read Have You Filled a Bucket Today? to my sixth graders each year, usually about this time. We then start a bucket brigade in filling each other’s buckets. -Karen Kraft Zielinski

I teach 5th grade- feeling your pain. I just began “Superhero of the Day!” I put all of their names in a jar. At the beginning of class, I draw a name. I do not tell them who it is. I’m very dramatic. They find out at the end of class who the winner is. If that student followed ALL classroom expectations, they get to get a prize. If not, I don’t announce the name out loud, I draw another name. I have a private conversation with the student whose name I drew first but didn’t display “super-heroic” qualities and reassure them to try harder the next day. Sorry if this sounds complicated, but it’s really easy. -Janay Hicks Hunt (Note from Rachel: This is similar to Secret Student.)

We talked about describing words for people and made a list (only positive). I had my students pull another student’s name randomly out of a cup and gave them each a sticky note. Then they had to write three nice describing words about that person. Then I collected the sticky notes, read them out loud to the class, and gave each child the note that was written about them. There were a lot of smiles and clapping. Some students have kept their sticky note on their desks for a few days now. -Jennifer Loskant Chandler

On TpT there is a package called End of the Year Class Compliments {FREE!}. I have used this similar idea in the middle of the school year to try and rid the class of the same attitude you are talking about. Try it…it is free! -Lori Ann Flemming Ferrente (Note from Rachel: This freebie is from Blair Turner. If you want to see how something like this can touch a family’s life in a significant way, read the first comment in the ratings and feedback section.)

Often, their tone reflects our tone with them. Be careful with how your interact with your students. Often, it’s easy for teachers to disengage at this time of year–whether you are trying to wrap up things while the students are there, or you just have summer fever–and when we disengage, they disengage. And then we become irritated with them. Just one of many variables, but attitude often reflects leadership. -Andrea Leighann

It’s the symptoms of spring and maybe hormones waking up. When this happened to me, I forgot about my class management that I used during the year and started a new incentive plan. It’s like erasing everything and starting from zero. You can have special treats, “no homework” passes, eat with the teacher the next day, or things they like at the end of the day for the student with the highest points earned. You’ll be surprised that the things they like more are free. Good luck. -Myrna Kohlmeier

Write everyone’s name on a separate piece of paper, and send it around the room for each student to write one nice thing on about each student, anonymously. Have them turned in to you, you check to be sure they are all positive, and then give them to the students. (This came from Chicken Soup for the Soul many years ago. I have done this many times in my classes.) -Maureen Hoffman-Wehmeier

Several teachers also suggested using Class Dojo. You may also want to check out this Random Acts of Kindness Freebie or these Free Friendship Cards. 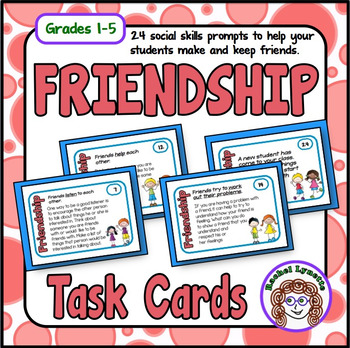 Find out what Jenny decided to do. She created an amazing plan that you can read about here.

Have you tried some of these ideas? Tell us how it worked with a comment, or add an idea of your own!

Positive News: A Simple, Effective Way to Bring the Positive Back to Your Classroom

The Rejected or Neglected Child in Your Class
Deb’s Top 10 Tips When You Are Assigned a Non-English Speaking Student!
Random Acts of Kindness: One Teacher’s Amazing Plan!